Bravo - You Made It

It's been a while since I played with Lets Scrap sketches. This particular sketch by Valerie Salmon looks very simple and easy to do. Being a last minute entrant and minimalist, I decided to select pattern papers with lots of motifs so as to minimise on embellishments. I also choose large letters to cover as much space as I could. As I always buy two of each release from my dear friend, Kelly at http://www.amothersart.com/, for this layout I decided to flip one of the papers so as to give balance to the overall layout.
I am continuing with Zahra's Cross-country of January 14th 2012 event to complete her album.
This is the layout based on the sketch below:
﻿

This layout is created for Colourful Creations - For Girls Only: Anything Goes Challenge. The only requirement is to have pictures of girls only.
This particular photo was taken on Jan 14, 2012 at Taman Tasek Perdana when my daughter participated in the Cross-Country race for her school. We were waiting for the third batch of students (Upper Secondary School) to complete their race before the prize giving ceremony. When this photo was taken (courtesy of Muhammad) the third batch of students were just released for their race. For Lower Secondary students, Zahra' won Third placing and was eventually selected to participate in the Selangor State Cross-Country race at UIA. She didn't get a good placing but the exposure was a good experience for her and her friends.

Finally, I am back to my creating board. This layout is for scrapfit challenge. The challenge is in Missy's words : This Warm-Up may or may not be a challenge for some of you. I know we fall into our comfort zones a lot and it's hard to break free. This challenge is all about patterned paper. That doesn't sound so bad, does it? Well, your challenge is to use patterned paper as your background...NO CARDSTOCK backgrounds! There are really busy patterned papers out there and then there are some not-so-busy ones...you can use whatever you choose...just no cardstock. Using cardstock elsewhere is perfectly fine.
The choice of title is a reflection of Zahra's name which in Arabic means flowers. Since the background pattern papaer is very busy, I decided to be minimal for this layout. Thank you for looking.
Posted by Lili Sulastri at 11:35 PM 2 comments:

A late entry, I know. Since I do not want to clutter this blog,I've decided to showcase my photos in another blog: http://myphotostrack.blogspot.com/. Happy viewing and I appreciate your comments. Thank you. 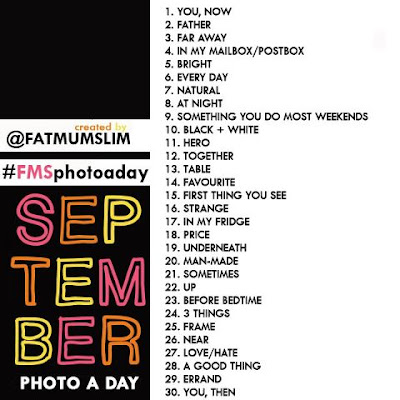 Father - A Tribute to Lt Kdr (B) Zainal Abidin Hashim

Today is Father's Day in Australia, or so I gathered from Chantelle's write-up. Her second theme for the month of September at fatmumslim is FATHER (2. Father: It’s Father’s Day in Australia. Take a photo of your dad. A Dad. A father figure. Etc.). Since my father has met his Creator on November 16, 2011, there will be no new photos of him. What I have are past photos that will always be looked at down memory lane. I decided to write a tribute for him instead based on what I remember of him. Once I am able to gather more info, I shall update my contents.
For now, here is a tribute to the man we all loved, respect and admire. A man who brought us all up with a firm and strict discipline and sometimes with a no nonsense attitude. He is also a man full of love and bear no grudges against those who had taken advantage of him, walk all over him or being unfair to him. Revenge was never in his vocabulary even though we know how hurt he had been. 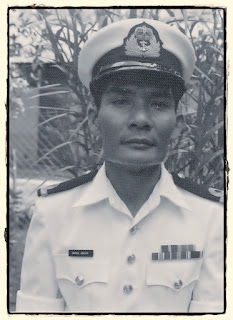 Dad was born on July 8, 1935 at Kesang, Melaka to Hashim bin Muharram and Aminah bte Mohd Baki. He was the seventh child of 14 brothers and sisters and lovingly addressed as Pak Andak by his nieces and nephews or Abang Enal by his cousins and younger siblings. He had a stepmother whom we never met but we did meet his only sister, Maznah, from that marriage.
Dad joined the Royal Malaysian Navy located at Woodlands, Singapore, when he was 16 as an Apperentice Welder, when RMN was then under the British command. Not sure how he managed to enrol himself in when the minimum intake age was 17. He worked his way up the ranks from Chief Petite Officer to Chief Officer - a rank he held on for years without much hope of moving up. Yet he was a patient man and his patience paid off when he was moved up one step at a time until he retired at age 45 as a Lieutenant Commander. His job was mobile. He used to be stationed at Mindeff, Jalan Gurney, Kuala Lumpur from 1967 to 1969, back to Woodlands again before he was stationed at Butterworth. Then he moved back to Woodlands  and when I was in Secondary 4, dad moved to Kuching, Sarawak. We did not follow him to Kuching, though. After 2 years in Kuching, he went back To Mindeff, before he was sent to Lumut Naval Base to help set up a training school there. In between he went to Portsmouth, England in 1964 to further his studies, in  1978 to Manadon for a degree in Engineering. He even had a short stint at Nirimba, Australia prior to joining the Naval Base in Lumut. He then returned to Mindeff when he opted for retirement. Below is his record (in his own handwriting) of his career achievements and courses he attended. 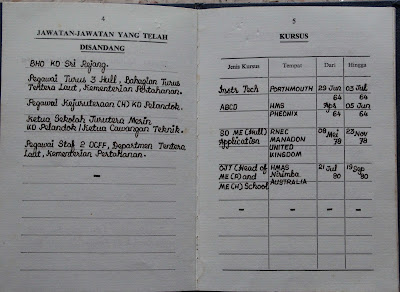 Other than snippets of information I gathered from him or mum in the course of his career, I don't really know anything else. I was young and never really asked much questions. Some things are private and confidential and he maintained that. He definitely was proud of his job and he was always connected to the KD Hang Tuah fighter ship. One thing I do know is that he never failed to deliver command, discipline and timeliness in all areas of his life and he even instilled that in all of his children.
FAVOURITE ROUTINE
Dad's favourite routine with all his grandchildren was to carry them, from first grandchild, Muhammad Azwan, right down to the youngest grandchild, Afza, round the house to introduce them to the crisp morning air, hear the birds chirping and to admire nature. He loved all his grandchildren to pieces, in fact, more than his own children. Around him, these grandchildren are untouchable. 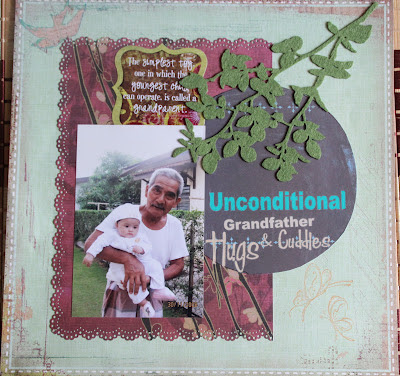 I created this layout for dad because he kept missing Afza so much. He loved to look at this photo of them together.
HOBBIES
Dad has many hobbies and all of them were related to DIY. He loves cars and one of  his first cars was a Mini Cooper. At least I still remember that car when we used to stay at Wadi Hana, Johor Bharu. For small repairs to his cars, he did them himself and that was how he developed the skill in repairing cars (an extension to his apperentice in repairing the naval ships). I remembered his other cars include Ford Anglia, Ford Cortina, Mazda and finally Ford Cortina 2000E. At least these were cars I remembered riding in.
( PHOTO TO BE ADDED LATER)
Dad is a green finger. He loves to plant fruit trees like mango, guava and some other decorative plants. He loves maintaining them, too.
(PHOTO TO BE ADDED LATER)
We are now very much into recycling and making so much propaganda out of it. Dad is a firm believer in upcycling. As the example below showed, this pretty but simple vase started its life as a Trumpet. When it was broken, the owner just threw it away but dad took it and with a bit of welding, turned it into a vase holding mum's handmade Hibiscus out of nylon strings.
(PHOTO TO BE ADDED LATER)
The swings below were lovingly crafted by dad from a piece of plank and a block of wood, respectively. These swings had gone through many fights among the grandchildren, a place to relax in the evenings, and a place where much discussions took place.
Last but not least, dad loves Music. He played the guitar and when he was younger and he formed a small band, I think while in the Navy. Not much about this was known but then his children did play an instrument or two. Only we did not graduate from our Musical 'career'.
(PHOTOS TO BE ADDED LATER)
Dad loves reading and his favourite read is among others on Cars. Reading is one trait 100% adopted by all his children.
DAD'S LIFE IN PHOTOS


In summary, dad will always be remembered by his wife, Sity Khatijah, his children, grandchildren and his familes and friends. For as long as I live, I shall present Al-fatihah to him daily. Amen.
﻿
Posted by Lili Sulastri at 8:40 AM 4 comments:

Welcome to My Blog

Lili Sulastri
I am a wife, a mother, a homemaker and an office worker and a crafter. In my spare time, I like to dabble in photography and use these selected photos to create layouts. I have no specific theme as I am still in the learning process and trying to try out new techniques. I have yet to learn to use my DSLR camera which was my 20 year anniversary gift from the company I work for. Scrapbooking is an extension of my photo journey.